Nothing says quintessential California like the San Fransisco pier on a sunny day, gliding around Fisherman’s Wharf and Pier 33 on hired bicycles. You almost expect the gang from Full House to turn up for ice creams. Pier 33 really doesn’t  feel like the departure point for the notorious Alcatraz Island but it is.

Your arrival point on Alcatraz Island

As you can imagine Alcatraz is a pretty popular destination for those visiting San Fran especially over the summer, and the only way to get there is using Alcatraz Cruises – the only ferry provider with access to the island . While there are many places selling tickets, there is actually only one tour operator and your best bet for reasonably priced tickets is to get them direct from provider… and to definitely get them in advance too.

Tours do sell out, and if like us and you’re on a limited timeframe in San Fran, you’ll want to book 90 days in advance to avoid disappointment.

Don’t worry, despite the large tour numbers and the need to book in advance it doesn’t feel over crowded and cues for the ferry and the tours themselves work like a well oiled machine.

The ferry ride to the Island is relatively short, but there is food available onboard and you can picnic in designated areas on the island too… to be honest we weren’t that organised, so scoffed something down on the ferry and then ate something more substantial once back on the mainland after the tour.

We opted for the Night Tour, you know for added atmosphere and to make the most of our only full day in San Fransisco. At first I thought referring to it as the “night tour” was odd, seeing as we left the San Francisco pier at 4:45pm on what seemed a glorious summers day. But as the tour went on, that famous San Francisco fog rolled in and coated the old concrete prison in a thick spooky mist. It was brilliant!!

You’ll be walking from the ferry drop off point up the hill to the Cellhouse, it is a steep walk but a fairly shortly and totally doable and there is no rush… there is a transport option for those less able.

The absolute highlight of the tour, and what makes it one of the truly best tours out there, is the audio tour of the Cellhouse. The audio tour allows you to separate yourself from the crowds and take the award winning tour entirely at your own pace. You can even manage to get photos without hoards of people in the shot, unlike other tourist destinations. 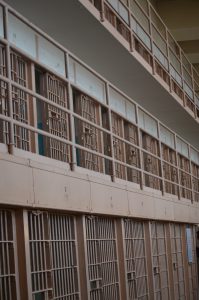 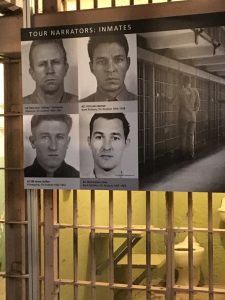 Some of the voices of the Doing Time audio tour 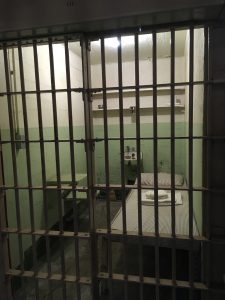 Voiced by actual Alcatraz inmates and guards the ‘Doing Time‘ Night Tour was nothing short of brilliant, and unlike other audio tours you never get lost, or wonder if you’re actually looking at the right thing… special attention has been paid to make sure instructions and directions are easy to follow, making it hands down one of the best tours I’ve been on. It’s a clear, concise tour that delivers short but power snippets of life at on Alcatraz.

The rough old voices recounting their time as inmates or guards seem totally genuine and almost unscripted, adding a relatable human element on something that’s existed only in Hollywood movies for me, transporting me back in time to when Alcatraz was an operating prison. You can almost picture yourself doing time on the rock, and can imagine the uncomfortableness of doing time solitary confinement.

Vivid mental images are painted through the stories told by both ex-inmates and guards of the various riots, escapes and accidental deaths at Alcatraz. Despite having featured in many movies over the years, there were many aspects of the Alcatraz that came as a surprise to me.

By time we emerged from the Cellhouse, outside was a thick airy fog and the daylight was fading. Yellow lights throughout, cast a spooky glow and made for excellent pictures. It reminded you how isolating Alcatraz could feel even though it’s only mere 2 kilometres off shore from San Fran. As we exited the Cellhouse I was really glad I’d bought my puffer jacket…and even a light scarf. 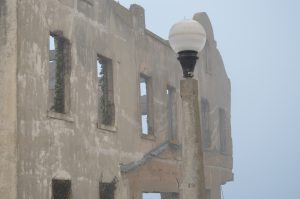 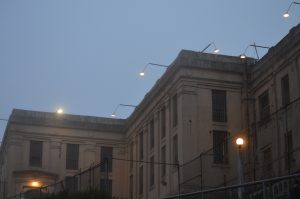 The Alcatraz Cellhouse at nightfall 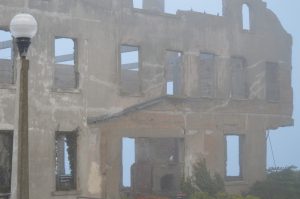 A lot of the buildings on the island aren’t part of the night tour, and most of the ruins and shells of buildings are roped off for safety, but that’s okay, the tour is plenty in terms of length and content. If you go during the day you can explore more of the island and visit exhibitions in the New Industries Building or take part in other free lessons about the history of Alcatraz.

You can leave Alcatraz on any ferry, there’s no designated timeframe. Although if your doing the Night Tour, it’s worth noting the last ferry leaves the Island at 7:45pm. I have no idea what happens if you miss the last ferry…

All up your Alcatraz Night Tour will take around 2.5 hours, we caught the last ferry back at 7:45pm and in hindsight should thought in advance about where we were going to eat dinner. Obviously at 4:45pm when we left the dock in San Fran we weren’t thinking about dinner. Have a dinner plan for once you’re back on the mainland.