The Problem with Perfectionism

Have you ever sat one of those dreaded personality tests? You know the kind, there’s no “right answer” but everything kinda seems a little like a trick to make you look like a asshole. I had to sit one as a part of the interview process for a job I’d applied for,  it was full of bizarre yet straight forward questions, and I couldn’t quite tell what the preferred answer as meant to be. One of the questions asked if I was a perfectionist and I guess to anyone on the outside looking in I don’t look like much of a perfectionist. I’m certainly not immaculately turned out,  I’ve been known to have messy hair and chipped nail polish, I don’t excel at everything I do, but then again…

…perhaps I am a perfectionist.

Later in a second interview for the job, the interviewer referred to this question. “Can you give me an example when being a perfectionist is a negative thing, or has negative effects“was he onto me? Confused I initially struggled to answer the question. My interviewer prompted me, “would striving for perfection halt your progress“. Initially I thought no way, don’t be ridiculous… but then again is

…perhaps I am a perfectionist.

Is a desire to be perfect, that constant striving for perfection actually known as personality flaw? 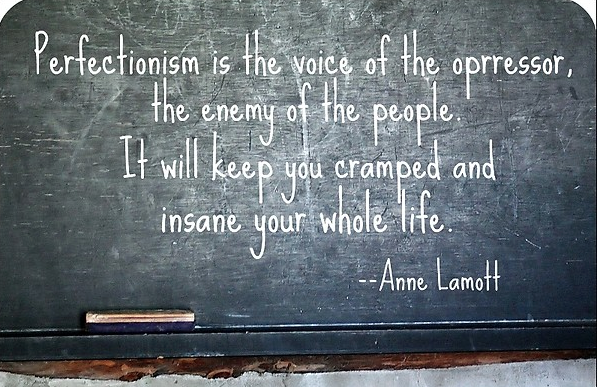 All-or-nothing thinking, I’m definitely guilty of it and it’s a sure fire sign of a perfectionist. It’s that tendency to set high goals, work hard towards them but tolerate nothing less than excellence or success. Perfectionists are different to high achievers, who set high goals, work hard toward them but who are satisfied with a job well done. A perfectionists will accept nothing less than… perfection. ‘Almost perfect’ isn’t good enough, it’s perceived  as failing.

Not such a big deal you say… but imagine never being 100% satisfied with goals met, work done or tasks accomplished.

It’s no secret, I’m super critical of myself and yes at times I’m critical of others two. It’s something I’m trying to work on but it is hard. Perfectionists are known to be much more critical of themselves and of other people. While those pesky high achievers take pride not only in their accomplishments but they also tend to be more supportive of others.

Working in the marketing industry I’ve honed my skills and have worked hard to spot mistakes in copy, in advertising, in artwork and like most perfectionists I can spot minuscule mistakes and imperfections in not only my work but also in myself. Unfortunately I also can spot those teeny tiny errors, imperfections and areas of improvement in other people and in their work, which really isn’t very nice. I’ve always joked that I’m quite the bitch… but looking at it now I’m just too focused on perfection.

I sometimes zero in on any imperfections and struggle to see anything else. I can be judgmental and hard on myself when ‘failure’ does occur.

The high achievers I admired at school, university and now in my work life tend to be pulled toward their goals and are driven to achieve them through desire, they’re are happy with any steps made in the right direction. Perfectionists like myself tend to be pushed toward a goals spurred on through fear. A fear of not reaching the goal, and having to admit you tried and failed. Sometimes avoiding trying for a perfectionist is easier than failing.

Yup! A true sign of a perfectionist is unreasonable goals, goals the are bigger than Ben Hur and basically not measurable or achievable. Once upon a time I decided I was quite literally going to be a completely different person with my Quest For Awesomeness… a clearly odd and unreasonable goal.

High achievers still set goals high, and may go beyond the goal once it’s reached, but a perfectionist will often set their initial goal so far out of reach that becoming disheartened by ‘failure’ is often almost inevitable.

IMPORTANT NOTE FOR PERFECTIONISTS – Take goal setting seriously, don’t aim so high that a small hiccup or bump in the road will have you screaming ‘failure’ and quitting. Break one big massive goal into a series of smaller more manageable goals… once you’ve reached a goal then you can decided to step it up and take it further. Breaking goals into smaller chunks will make things easier to achieve, and thus make you the perfectionist happier.

Those of us who are perfectionists are much less happy than those easygoing high achievers (damn it). Thinking about myself and … and comparing myself to high achievers I know, it’s probably a fair assessment. A high achiever will bounce back fairly easily from disappointment or so-called ‘failure’ whereas a perfectionist (like myself) will tend to beat themselves up and wallow in negativity when those ridiculously high expectations go unmet. OMG this is sooooo me, sometimes I get so disheartened when things don’t go as planned.

Being so afraid of failing that you just stop trying! Placing so much value on the completion of goals, seeing  and results that it’s disappointing when goals aren’t 100% met! That fear of failing will ultimately hold you back, while others move forward. As perfectionist anything less than perfection / success / results is seen as ‘failure’ which can lead to…

It seems ridiculous and ironic that a perfectionist could be paralysed by fear of failure and procrastination but it’s true… perfectionism and procrastination do tend to go hand in hand. Because of this gosh darn fear of  failure, us perfectionists (myself included) will sometimes worry so much about doing something less than perfectly it almost acts as a brake and NOTHING gets done!! And here’s the kicker, this then leads to more feelings of failure, guilt, negativity etc etc and thus a vicious cycle is created. 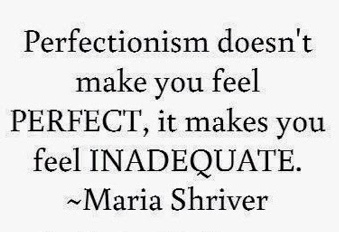 Being a perfectionist I’m highly self- critical, which in turn leads to feelings of unhappiness and low self-esteem.

When so much weight is placed on being a unrealistic level of perfection it’s easy to get sucked into worrying and stressing about those unrealistic and unreasonable goals set before you. I know I’ve done it to myself…. with dieting. With fitness. With new hobbies. With New Years resolutions. I’ve set goals so high that failure was inevitable and then I’ve become highly self-critical and become my own worst enemy. My very own bully.

Equally I hold onto any criticism given by someone else, no matter how small, a make into more than it really is. These teeny tiny criticisms circle almost constantly around in my head at times.

Reading up on perfectionism, it lists loneliness and isolation as signifier that you may be a perfectionist. sighting that a perfectionist critical nature and rigidity will often push others away. Perhaps this is why of the years I’ve lost so many friends and failed to make lasting connections with people. Not surprisingly enough this can lead to lower self-esteem, and another vicious circle.

Recognising  that you possess some these perfectionist traits is apart of that all important first step towards becoming that easygoing, content and successful person that lies ahead of overcoming perfectionism. 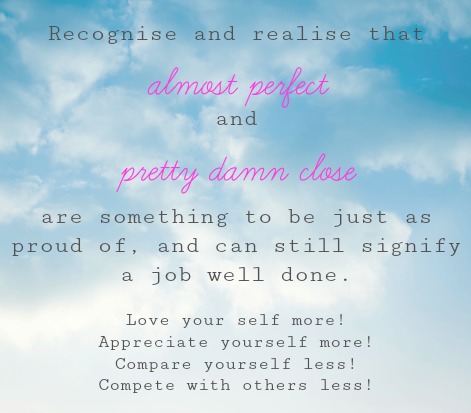 For more about perfectionism and tips for moving past your perfectionist ways check out the below sites:

I specifically made time for this… and I’m gla

USE IT! OR LOSE IT! I let lockdown and self impo

Flagging resolutions in favour of giving the peopl

I’d rather be camping…

Needed this… campground coffee and a good book.

Road trippin’ … it’s what we do at Christmas

Final escaped Auckland! And found myself some stre