The State Of Journalism In Our Digital Lives

Social media and our now digitally saturated lives mean the core of journalism has been forever altered, and largely for the worst I believe. We expect news updates fast, and will tolerate articles packed with he said, she said while accuracy falls by the wayside.  Opinion and fact are interchangeable and information is fast and easy to come by, investigation is as easy as tapping away on a keyboard and smashing some search terms into google. The prevalence of Facebook and news apps on our smart phones,  as well as Instagram and Twitter mean our demand has changed, we digest media differently and expect news stories, gossip stories, opinion pieces, rumour and salacious stories fast and updates almost instantly.

Like naughty teenagers the motto of the day is “it’s easier to ask for forgiveness, than to ask for permission“.

News media outlets now battle it out to bring you the “news” first… not the news most well written, or news most well thought out. Speed is the most important part of journalism now… not whether the material reads correctly, or that credible sources have been quoted or that it’s even news. We deal now in “content” which we expect constantly, rather than the hard-hitting journalism which once upon time unearthed important issues and information and the most popular bloggers and “influencers” almost sit on the same shelf as our journalists.

A child dies and the journalistic content of the story stretches only so far. A child dies and more children are quoted in the media, based on what they’ve said on Facebook. No reporter actually speaks to these people; there is no interview or one-on-one conversation. In fact the story was probably composed without the reporter ever having to leave their home office or get out of their PJ’s.

Even the ghastly celebrity news just re-reports Facebook, Twitter and Instagram; things we could all easily subscribe to ourselves… if we were in fact interested. A journalist reporting on celebrities, either local or overseas, never actual needs to leave the house, put on pants, or even know much about the celebrity… it’s all a matter of simply bashing away on a keyboard.

Silly little faces and cartoon type images are now something to report on. Emojis are actually something worth mentioning in a “news” piece?! Journalism is no longer the art of bringing important news to the people; it’s the art of Facebook stalking and a semi-skilled use of Google. We no longer read news articles but digital content, and the traditional layout of the biggest and most important stories being seen first has long gone. Sausage rolls sit alongside election coverage and salacious celebrity gossip sits at the top. Literary drivel once reserved for Girlfriend magazine now lives proudly on the pages of once prestigious papers. 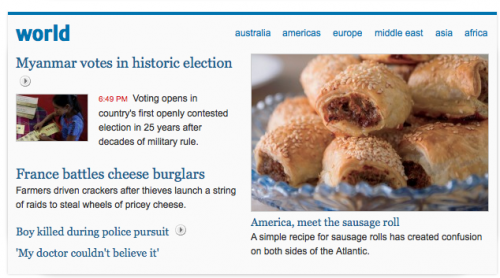 I miss the days when you could spend all Sunday reading the newspaper, pouring over investigative pieces produced by someone who’d spent many hours obsessing and working hard, to bring you something that was well thought out. I miss the days when 20/20 or 60 Minutes would blow your mind with a well thought out presentation of facts and opinions from both sides of an argument.

Now, I’m not total naive, I do understand that editing and the personal opinion of the reporter or presenter can come into play but nowadays we’re seeing blog style content not coverage of important topics. When I first left high school I wanted to be a journalist or a radio host, I saw journalism as an intellectual career with the chance to help deliver essential information to the public. I felt I wasn’t talented enough for print, either newspapers or magazines, and instead focused on radio journalism for two years. Radio journalism in New Zealand is a fairly small pond and it turns out is largely a personality game hinged on not what you know but who you know… and I wasn’t prepared for that.

The situation in which our global village and boundless community makes sense and prevails, is those situations of huge international significance. Digital technology crosses oceans and connects us all to stories and all locations, like terrorist attacks overseas and the legalisation of same sex marriage in other countries, Those stories are now made more human, and delivered to us via a number of different avenues… the evening news, printed newspapers, digital newspapers, Facebook, news apps on your smart phone,  websites, blogs, YouTube, the human side of these major international stories is delivered to us via a number of outlets.

News stories are more accessible, information right or wrong is easier to stumble across and while traditional methods of journalism are potentially dying out, there is a new style of journalism…making all of us potential journalists, which is actually a little bit exciting. However, with this shift in journalism comes a minefield of outdated, incorrect or false information, as well as that dangerous cocktail of opinion disguised as fact mixed with a mass audience.

When so much of our own decision making is based on the information we find or stumble across I think it’s so important that we each remember, right or wrong, anyone and everyone can contribute to what we’re taking in. Expert or not, everyone’s opinion and misinformation is available for you digest. Don’t assume major publications are presenting the correct and full story. Don’t assume that someone is sharing legitimate facts, simply because that have ridiculous number of followers. Be discerning in what you choose to read or view and take onboard.