David Steindl-Rast: Want to be happy? Be grateful

After the brilliant Store Metaphor I’ve struggled to find something to top it. There are so many inspiring things out there, but for me The Store Metaphor made so much sense, topping it was feeling impossible.

I wanted to find out more about happiness, and where other people think happiness steams from, so where else do you turn to for profound answers and brilliant video content…. TED of course! And that’s where I stumbled across David.

David Steindl-Rast is a Catholic- Benedictine Monk, born in between World War One and World War Two in Vienna in 1926. After  receiving his MA from the Vienna Academy of Fine Arts and a PhD from the University of Vienna, David emigrated to the United States in 1953, where he joined Mount Saviour Monastery.

After twelve years of monastic training and studies in philosophy and theology, Brother David was chosen to participate in Buddhist-Christian dialogue, and co-founded the Center for Spiritual Studies with Jewish, Buddhist, Hindu and Sufi teachers. So it’s fair to say that this man is attuned with spiritually from more than just a catholic perspective,  in 1975, Brother David was awarded the Martin Buber Award for his achievements in building bridges between religious traditions.

Long before Mindfood magazine and Oprah Winfrey were banging on about gratitude journals, Brother David was writing about gratefulness while co-founding A Network for Grateful Living, an organization dedicated to gratefulness as a transformative influence for individuals and society. All of us want to be happy, it’s no great secret, but as Brother points out in this TED Talk, “how we imagine our happiness, that differs from one another“ but still has the common thread, of wanting to be happy. Happiness he suggests steams from gratitude, there’s tons of publications and blogs out there highlighting that gratitude and happiness go hand in hand but his is one of the best and simplest explanations I’ve come across.

Now I know that you can’t just decided “right then, I’ll be grateful” and BOOM instant happiness, where does gratitude even come from? I know I struggle to pluck gratitude from thin air, so what creates this feeling of gratitude. Brother David sheds some light on this “it has to be something valuable, and it’s a real gift….it’s just been given to you”. Much like the perfect cocktail or a truly magic recipe, when these two things come together something truly valuable  happens according to David.

I guess this is true, some of the things in my life that I am truly most grateful for aren’t things I’ve purchased, or traded for, they’re things given to me as genuine gifts, moments in time, a sense or a feeling. Most of these things you can’t buy, or always work for and they aren’t often easily traded for.

However, random gratitude dotted throughout your life isn’t the answer, we should live gratefully ALL THE TIME as David so rightfully points out.

Hearing this, I had sudden heart palpitations at the thoughts of trying to be forever grateful… eeeep! That could get tricky.

David covers this off with brilliant tact and highlights the importance of building stop signs into our lives. He reminds of the importance of STOP! LOOK! GO! as well as the opportunity we have to transform the world and make it a happy place. 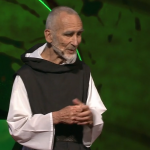 Gratitude practiced on regular basis is said to have some amazing knock-on effects, including: