The Cost Of Water

We’ve all heard “if you’re feeling thirsty, you’re already dehydrated“, which seems kind of cruel, like your body own has turned against you.

You find yourself standing, arms raised, hands outstretched, screaming “there were no signs” and “how was I to know“. I often rely in feeling thirsty to remind me to “drink more water!“. We’re discouraged from eating when we’re not hungry, but thirst is different. Apparently.

Our literal thirst for water, has turned the bottled water industry into a rapidly growing market, averaging 8.5% growth per annum, ultimately creating a $200 billion worldwide industry. But buying bottled water still seems almost laughable when you think about it, paying $4 for something you literally have tons of at home, the same thing that some communities in the world are in desperate need of. To top it off, water is often the same price or more expensive than carbonated drinks and juices which are less healthy. 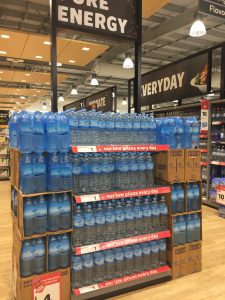 Selling bottled water to us, the masses, has often been touted as the greatest marketing achievement. It’s living version of selling ice to Eskimos.

Imagine if people instead took a drink bottle with them, and donated the $4 to an agency building wells and creating access to water in those communities who currently struggle. The mind boggles.

Buying water is an age thing, typically people in their 70’s and 80’s aren’t buying water. Your grandparents and possibly parents wouldn’t dream of paying for water. At the back of my mind I can hear my dad saying “but you’ve got water at home“. Buying water is something we do, we’re the ‘to-go generation‘… we take our coffee away, have our smoothies on the go, and buy bottled water every time we’re thirty.

In terms of sustainability, bottled water is a dry desert. It’s costly, wasteful, and distracts from the construction and maintenance of safe municipal water systems, and while most bottles are recyclable, many bottles are never actually recycled.

Need some solid reasons to ditch the bottled water habit? Here are some reasons to get you started  …. 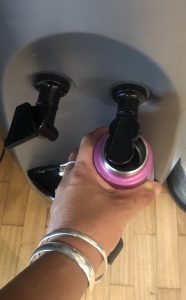 It’s not value for money.

If the question relates to weight loss, clear skin, and eye-bags the answer often includes “drink more water“.  Pure, cool, clear water seems to be one of the best beauty elixirs, and our desire to be and look healthy combined with our literal thirsty, fuels our need to buy water.

But the personal cost of purchasing bottled water adds up, and if you’re keeping on top of your water intake you could end up forking out a small fortunate over a week, a month, a year and over your lifetime.

Looking at the major players in the water fridge, Pepsi’s H2GO bottles or Coca-Cola’s PUMP bottled water. Both are sold in 750ml bottles and can be purchased from vending machines alongside soft drinks, and often at the same price. These two brands are essentially filtered tap water, bottled close to their distribution point. In New Zealand most water provided by your council costs less than 1% per 5 litres or 0.2% per litre.

Imagine if petrol, which is pumped out of the ground in the form of crude oil, shipped to a refinery, and then shipped again around the world to your local filling station was priced similarly at $3-4 per 750ml rather than the current $1.99 – $2.050

The New Zealand Herald even recommends giving up buying bottled water in its tips for saving money in 2019. 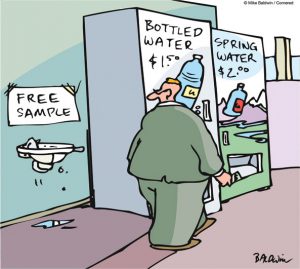 Generally speaking, bottled water isn’t better for you, and while some may argue that it tastes better, there comes a point when all chilled water pretty much tastes the same. Some of bottled water out there, isn’t even from a magical spring or majestic mountain range and is in fact just standard tap water… just like the water you have at home.

There are of course parts of the world, where the water is unsafe to drink and you are better to buy water, but for the large part that’s not the case.

Consumer NZ recently did a study, comparing bottled water to tap water in both Auckland and Wellington and found that all the bottled water tested that claimed be spring or mineral water had the lower fluoride levels you’d expect.

In taste tests, tap water often wins. And chances are that the water flowing from your tap has been tested more than what you are guzzling from a bottle. That’s because most cities regularly test tap water to make sure it doesn’t contain dangerous germs or chemicals. Bottled-water companies don’t have to test as rigorously.

Plastic straws have recently become public enemy number one, but surely next on the hit list is plastic bottles, specifically those bottles initially filled with water … which most of us have free at home.

Due to its slow decay rate, a huge majority of all plastic bottles ever produced still exist somewhere, representing a huge risk to the environment we live in and the environment in which we source our food.

Access to bottled water means in some parts of the world, there is little outcry over poor quality drinking water.

This is like running around with a slow leak in your tire, topping it off every few days rather than taking it to be patched. Only the very affluent can afford to switch their water consumption to bottled sources.

We still need to be focusing and investing in our water re-courses and municipal water treatment plants. Is New Zealand ready to go totally down the user pays track or can we work together to provide everyone with great tap water.

One of the most popular water brands in the U.S is Fiji Water; making Fiji ironically both home of the plant that bottles Fiji Water and a home to nation of people and visiting tourist who are recommended not to drink the tap water. 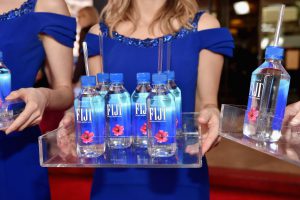 Fiji water, the stuff that comes out of the nation’s taps (as apposed to the brand) can also include shells, frogs and invisible typhoid and gastroenteritis bacteria… bonus! Outside of the main cities of Suva and Nadi, and off the mainland resorts, it is recommended you do not drink tap water.

The 27-kilometer long underground aquifer where the Fiji Water company fills its bottles with great quality water, isn’t actually tapped for the local population. The Fijian government doesn’t have the infrastructure, the money (or the will) to make it happen and instead many Fijians have to make do with cracked, broken and contaminated water pipes and a supply which is often polluted after heavy rains.

I’m not saying drinking bottled water is a bad idea, and that the convenience should exist at all. Sometimes in life there are circumstances like when a flood or a broken pipe interrupts the local water supply, where bottled water literally can literally be a lifesaver. Similarly, if you’re out and about and in dire need of a drink, choosing bottled water over a sugary energy drinks, carbonated drink or juice is definitely the healthier choice. However, when you have a choice between bottled water and tap water, either filtered or unfiltered, drinking from the tap is a better choice for your wallet and for the planet.

Sometimes all it takes is being prepared and taking a drink bottle with you.